If you own a lawn in Vancouver you are probably aware of the dreaded European Chafer Beetle.

Now a new- and in many ways worse- threat has emerged, with the discovery of the Japanese Beetle in False Creek.

Like chafer beetles, the larvae feed on turf grass roots.

But they are also found in the roots of many other plants, and adults feast on more than 250 species of flowers, foliage and fruit.

In short, if it has leaves, it is at risk.

The Japanese Beetle was first discovered in BC last year, although it was introduced to North America in 1916.

Nine Vancouver parks have so far been affected.

The City of Vancouver has implemented a regulated zone, restricting movement of plants and soil.

The area is bordered by;

The Canadian Food Inspection Agency is using larvicide and traps to limit the damage.

There are also several ways the public can assist.

2.       Do not touch the Japanese Beetle traps that are being set within the regulated area

3.       Do not move soil, plants with soil, pruning waste and other plant debris from areas where the insect has been reported 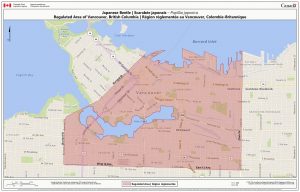